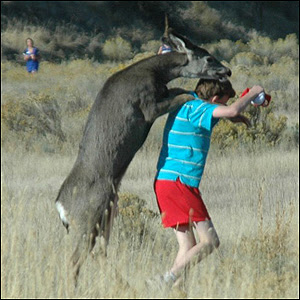 Ten things you Google when board at work

1.Yourself.
2.Your girlfriend's ex.
3.An old crush/obsession you
haven't seen in years
4.Autotrader.com to see how cheap Ferrari's are.
5.The next place you're going on holiday
6.Facebook
7.Your house/school on Google Earth
8.The name of a new actress on TV - in hope of
some old 'arty' shots.
9.Old bullies hoping they work at Burger King
10.Videos of animals attacking humans
Posted by s at 7:42 AM 2 comments:

Enoch Powell must be chuckling from beyond the grave..

That was the amusing text someone had sent in to BBC News 24 after the question time debate. Immigration has become a hot issue again, with parties scrambling for the most subtle ground to voice concerns, whilst simultaneously fomenting that 'talking about it isn't racist'. Well there is obviously a racist undertone which is if isn't there in reality, is certainly there in perception, otherwise politicians wouldn't be so extra careful when discussing it.

The notion that immigration must be restricted rests on the premise that this territory belongs to a certain people and no-one else. In which case we're moving towards the mentality of Israeli settlers which is unequivocally racist.

The fact of the matter humans should retain the right to freedom of movement, immigration and migration have been with us from time immemorial. The UN estimates that "over 4 million" Iraqis have been displaced by violence in their country, 1.5 million are now living in Syria, and over 1 million refugees inhabit Jordan, Iran, Egypt, Lebanon, Yemen, and Turkey. Even Darfur, Sudan, which has no border control, is facilitating refugees. Syria for example is providing as much humanitarian aid to its refugees as possible while maintaining the strain on services for indigineious citizens.

All this whilst people are talking about a strain on the NHS because of immigration, the NHS simply wouldn't function without immigrant workers. What's at the root of politicians braving a potential smearing by talking about this issue is simple, there is an ignorant section of the electorate, prepared to accept a scapegoat.

Dividing the working class amongst eachother in this country will not achieve anything. The government has failed to invest properly the huge economic gain from immigrant workers to improve the efficiency of public services, their failure to acknowledge housing requirements caused by immigration even now has badly affected local councils, which rely upon an accurate assessment of their "population in order to qualify for Whitehall grants", and has obvious "knock-on effects" on other services such as education and healthcare.

if we had a truly free market economy the illegal immigrants would not be the scapegoat, we would probably need them and they'd be accepted, but because of economic conditions, they have become the scapegoat..

When you take the "offical" definition of terrorists... as in the American definition, you have to see that they themselves, those in power, those in office are actually that which they define... and how are they any different? How do they justify the means when the end only has brought about a constant build up? Maybe somewhere along the line, those officals must confront that it is they themselves who they need to fight against.

Also, a substantial amount of resources are put into inculcating a culture which accepts the wrongs of the state, and condemns the wrongs of others. Knowledge and truth simply belong to those with the power to impress their version of truth on to others. Resistance needs to come from a break down of the cultural consensus, which engenders some critical thinking, we hope it extends more within the US!

The cultural consensus is propigated by the US owned media, world wide...this in turn validates in however small way, the actions of politicians which most "normal" people would not take at face value, as most of us have an instinctive suspicion of those in power. The problem is how do you take away the cultural consensus when the mainstream media is a propaganda machine?

Essentially what we're doing right now is facilitating some form of discussion outside of the prism. I happen to think more people simply want to know more than what they're told in 30 second snippets on the evening news, and in the information age its possible. I'm vaguely optimistic!
Posted by s at 6:49 AM No comments: 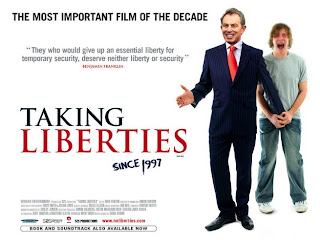 
- Internment without trial for non-citizens suspected of terrorist links

- Retrial of those who have been aquitted, thus eroding the double jeopardy principle

- Attacks on the indepedence of the judiciary

- Introduction of ID cards, so that people can be monitored at all times

The basis of our current system is absolutely nothing to do with that, the question of protection of citizens from the state is open to debate, and there certainly should be safeguards against the conviction of innocent men and women, but to suggest that the protection of actual 'transgressors' is the basis of our current system is nonsense!
Posted by s at 9:25 AM No comments: 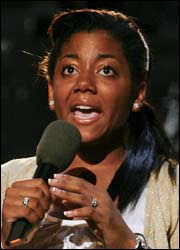 Emily from X Factor was caught in a video allegedly 'happy slapping' a girl, while at school. The attack was filmed by friends on a mobile phone and has been sent to "loads of kids" from her school.

She's subsequently quit the show, with the her mentor deeply saddened by it all.

http://www.thesun.co.uk/sol/homepage/showbiz/tv/x_factor/article417626.ece
Posted by s at 8:44 AM No comments:

Given the US build-up of troops on the Iranian border (Independant, Oct 29th) It seems that control of Iranian Oil is top of Bush's list of 'things to do before I retire'.

With US troops in Iraq on one side and in Afghanistan on the other, and a build-up of warships in the Gulf, it seems that Iran has been the main target from the beginning!

Danielle Pletka, wrote in The Wall Street Journal: "there is clear information regarding Iran's link to a weapons of mass destruction programme."

If a salesman sold you a car, and it broke down immediately, do you return to and believe the same person a second time?
Posted by s at 5:35 PM No comments: