Occasionally the conflict between "what we stand for" and "what we do" has been forthrightly addressed. One distinguished scholar who undertook the task is Hans Morgenthau, a founder of realist international relations theory. In a classic study written in the glow of Camelot, Morgenthau developed the standard view that the US has a "transcendent purpose": establishing peace and freedom at home and indeed everywhere, since "the arena within which the United States must defend and promote its purpose has become world-wide." But as a scrupulous scholar, he recognized that the historical record is radically inconsistent with the "transcendent purpose" of America.

We should not, however, be misled by that discrepancy, Morgenthau advises: in his words, we should not "confound the abuse of reality with reality itself." Reality is the unachieved "national purpose" revealed by "the evidence of history as our minds reflect it." What actually happened is merely the "abuse of reality." To confound abuse of reality with reality is akin to "the error of atheism, which denies the validity of religion on similar grounds." An apt comparison.
Posted by s at 3:38 PM No comments:

Mr Brown has the bad luck to look like his party and like his government, ie not very nice. But he is no worse than Anthony Blair, who was voted for and tolerated by many of the people who are now so enraged about Gordon Brown. There is no significant difference, apart from public relations skill and the physical features of the Prime Minister, between a government led by Gordon Brown, Anthony Blair and David Cameron. Labour's poll ratings and popularity collapsed not when it changed its policies (for it never did) but when it swapped a Prime Minister who could smile but not read, for one who could read but not smile.
Posted by s at 7:08 AM No comments:

We are still governed by an unaccountable establishment. But nowadays it is made up of Eurocrats and human rights judges, BBC executives and quango heads.
Posted by s at 3:05 AM No comments:

Ban did condemn "the excessive use of force" by the Israelis in its massive assault on Gaza. As Abu Nimah noted, presumably the UN Secretary-General "found Israel's attack on Gaza perfectly acceptable, but he disagreed only with the tonnage of high explosives that should be dropped by Israeli planes." While correctly condemning Hamas rocket attacks on Israel as "violations of basic humanitarian law", Ban neglected to say the same of Israel's ongoing massive violations.
Posted by s at 3:42 PM No comments:

So you've seen television ads. Suppose there's a television ad for a drug, or a car, or something. In a market society, what you would have is a description of the properties of the commodity because then you get what are called Ôinformed consumers making rational choices.' But that's not what you get. What you get is forms of delusion because the business wants to create uninformed consumers, who make irrational choices. That is, they want to undermine markets. Which is very much like the political system. You want an electorate, which is uninformed and makes irrational choices under modern democracy, so the whole kind of ideology is so remote from reality that it's almost impossible to discuss.
Posted by s at 10:55 AM No comments: 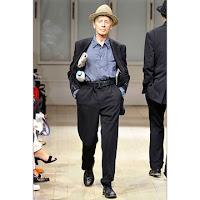 Yohji Yamamoto, Spring 2009
Sure, the creative loafer has the cash, but he's not about to pay someone else to pick up his milk and morning paper. After all, the vocation may be artistic, but the values (and, in this case, the clothes) are blue-collar.
Posted by s at 11:01 AM No comments:

Mark- I find your blog very thorough and engaging. I don't however seem to see much distinction between our military institution and our political system which couldn't be further apart at this moment in time. As an anti-war Brit I don't think the confidence and effectiveness of our armed forces is to be taken lightly, afterall they are probably the reason I am freely able to conduct this e-mail to you right now.

Surely though you can separate criticism for our political elite from demeaning the role of our armed forces. If you agreed with the war then its not an issue, but for those who feel tagging along with the worlds only superpower in plundering vulnerable third world countries is not a good policy- shouldn't be required to bite their tongue in a time of war.

This has nothing to do with the general principle that a strong national defence is of utmost importance. Do you have an opinion on our political leaders, most with no military background, making decisions to send our troops to war on ever-changing pretexts? Moreover ill-equipped in many cases- If so what is the required mode of protest?


NOT FOR POSTING ON MEDIALENS
Salim,
I am replying to some of the recent traffic caused by my Iraq blog but would ask you to respect that this is a personal response to your interesting mail, rather than an attempt to re-start the debate in the forum of Medialens.
Yes, I accept there is a difference between criticising the political elite and the armed forces. Nothing in my blog or the subsequent traffic precluded: opposing the war; criticising political leaders for getting us into it; and trying to ensure that such a thing never happens again. The primary lesson that I drew was in fact that prime ministers are unwise to take a divided nation into such a campaign. But once we were in, a moral responsibility to the Iraqis and need to support the armed forces justified support for British operations there.
As for political leaders with no military responsibility sending troops into battle, it can be problematic. I have heard differing views from generals on this topic. But while most would, I think, prefer to be led by people who understand ugly realities of battle, they accept that this is a rarity in modern society.
all the best
Mark

While welfare fraud is committed on a mass scale from the Banks to the front benches, the tax-man is still much more concerned with the some coucil estate dweller claiming benefits while working at Iceland.

Vote none of the above please.
Posted by s at 4:10 AM No comments:

I think that one of the sort of untold and unheard story of Pakistan’s entire existence in the United States media was the lawyers’ movement that peacefully, I might add, and in large terms secularly, drove out of power a entrenched military dictator, both out of military power, but also out of civilian power.


And I think that that really speaks towards two inherent presences in Pakistani society. One is they have a robust, critical media that is not multi-—sort of multi-voiced. There’s Urdu presses, Urdu newspaper channels, English newspaper channels and other regional channels and newspapers, so very, very diverse media that has had a critical engagement with the state on many different levels. And secondly, the need of Pakistani people, in general, to—you know, as in any other citizenry of the world, to ask for security, to ask for safety, to ask for engagement with their government.

And I think that the rise of this sort of civil movement, the lawyers’ movement and its sort of student wing, really speaks to the articulation by the Pakistani people that they want to operate within a democratic framework and not within a sort of a military dictatorship that they had been under for the past ten years.

One former Labour minister said: "I object to your decision not to reimburse me for the costs of purchasing a baby's cot for use in my London home... perhaps you might write to me explaining where my son should sleep next time he visits me in London?"
Posted by s at 5:01 AM No comments:

Don't mind paying taxes so that male MPs can order nappies and tampons even though they live alone, its pointless wars, trident& IDcards that the Telegraph fails to grasp the public outrage over.
Posted by s at 4:49 AM No comments:

IF there is anything more indicative of the inherent bias in our mainstream media which is miles apart from the people it pretends to inform and represent, its the reaction to the top rate tax increase.

Despite the fact that 68%, a large majority of the population are in favour of increasing the rate, the media have focussed on the political nature of the move in a collective effort to undermine it and present it as some kind of spiteful throwback to old labour.

Interesting angle to take given the mainstream press are comprised largely of 150k plus earners from public schools.
Posted by s at 4:14 AM No comments:

Joanna Lumley seems to have taken to the Ghurkha's in classic orientalist fashion. In fact the entire media has exoticised and romanticised the Ghurka's as this mysterious fighting force from the bygone days of Empire.

Very patronising and self-regarding of a Joanna to appoint herself the articulated consciousness of the Ghurka's plight. I see no similar campaign for our own soldiers who are underpaid, underequipped and sent to wars on ever-changing pretexts.

The government lost on such an issue of principle but the same people couldn't bring themselves to protect their own citizens and indeed constituents from summary arrest and detention without trial for more 500 hours, dismantling ancient liberties. The principle should be the following, in our current condition: people willing to lay down their lives for this country, should have their heads thoroughly examined.

After Ian Tomlinson's tragic death, I hope foreign offices around Europe and even Africa are warning their citizens not to participate in political rallies when visiting the UK. Protests are being increasingly seen as inherently subversive and a threat to the state, whereas just about every worthwhile achievement has come about through political activism. WE haven't reached an end point, withering away the means to protest only provides fertile ground for the more extremist groups which explains the growth and relative popularity of groups like the BNP and hizb u tahrir.

Let's just hope ID cards are scrapped and these authoritarian measures are reveresed
Posted by s at 3:41 AM No comments:

If a writer has any guts he should write all the time, and the lousier the world the harder a writer should work. For if he can do nothing positive, to make the world more liveable or less cruel or stupid, he can at least record truly, and that is something no one else will do, and it a job that must be done. It is the only revenge that all the bastardized people will ever get: that somebody writes down clearly what happened to them." - Martha Gellhorn, 1941
Posted by s at 11:37 AM No comments: